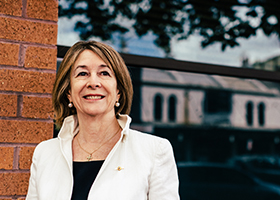 Professor Bennett was appointed to the role of Deputy Vice Chancellor and Head of Campus, Sydney, The University of Notre Dame Australia in February 2020. Prior to this she was Notre Dame’s  Dean, School of Medicine, Sydney for 9 years. Professor Bennett is a specialist paediatrician and has over 40 years of health industry experience in clinical care, strategic planning, business operations and senior management in the public, private and not-for-profit sectors.

In February 2008, Professor Bennett was appointed by the Prime Minister to be Chair of the National Health and Hospitals Reform Commission that provided advice to governments on a long term blue print for the future of the Australian health system and aged care.  The Commission’s comprehensive final report with recommendations covering all aspects of health and aged care was presented to the Government in June 2009 and has formed the basis for many reforms and initiatives currently being implemented by the governments of Australia. Professor Bennett has maintained an active leadership position as a commentator and strategist on health reform in Australia and internationally. In 2014 Professor Bennett delivered a US Ambassador’s Speakers Series oration in Washington on the shared challenges of the Australian and US health systems. Professor Christine Bennett was awarded an Officer of the Order of Australia (AO) in the 2014 Australia Day Honours.