Monsignor Michael Keating has provided critical support for Notre Dame and has been a most generous benefactor and a source of wise counsel to the University Trustees, Directors and Governors since its early days and formation in 1989.

He established The Leonard & Ursula Keating Scholarship in 1994 in honour of his parents, and The Monsignor E. Sullivan Scholarship in 1995 in honour of Monsignor Edmund Sullivan. In Monsignor Keating’s words, Monsignor Sullivan was “a remarkable priest“ and a scholar very close to Archbishop Launcelot Goody of Perth. He was the Parish Priest of St Brigid’s Church in Northbridge – then considered West Perth – and Monsignor Keating was his Assistant Priest from 1972 to 1974. Both scholarships were first awarded in 1996. 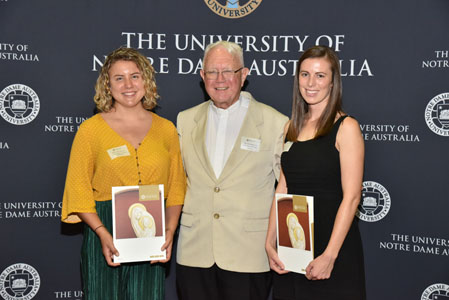 Michael Keating was born in Perth on 18 January 1940, he is the only son of Leonard and Ursula and has two sisters, Gay and Pauline. His father Leonard was in the tailoring business and his mother Ursula was a woman of great Catholic faith and dignity, who brought up her children to believe in themselves and in the power of education.

Michael’s family was very close, and he counts their love as a central blessing of his life. He attended Catholic primary and secondary schools in Perth run by the Brigidine Sisters, the Christian Brothers and the Jesuits. As a teenager, he went to St Charles’ Seminary in Guilford, where he was educated by the Vincentian Fathers.

In 1959 Archbishop Redmond Prendiville chose Michael to go to Rome to further his theological education. He spent seven years in the Eternal City and resided in the famous Pontificio Collegio Urbano de Propaganda Fide, a college established by Pope Urban VIII in 1627 for the purpose of training missionaries, until 1963, when he moved his residence to St Peter’s Postgraduate College for the remaining time of his permanence in Italy.

He completed a Licentiate in Theology in 1963 and Canon Law studies, finishing with a Doctorate in Canon Law, in 1966, both at the Pontifical Urban University.

He was ordained a priest on 22 December 1962 by Cardinal Gregorio Agagianian and elevated to the status of Monsignor by Pope John Paul II in 1982. Michael had the good fortune to be in Rome for the whole of Pope John XXIII’s Second Vatican Council, a formative and tumultuous time in the history of the Catholic Church. He attended the Council as a young deacon and was much caught up in the exciting and far-reaching debates and discussions. Michael’s years in Rome, especially his experience of the Vatican Council and all the signposts it provided for the Church for the future, have shaped him as a person, pastor and thinker. He returned to Perth in 1966 and began his long, fruitful and distinguished vocation as a parish priest. During the next forty years he served as Assistant Priest in Cottesloe and West Perth, and then as a Parish Priest in Mirrabooka, Highgate, and Bateman, before moving to be Dean of St Mary’s Cathedral until his retirement in 2018.

He also served in the role of Vicar General from 1984 until 2000 and as Chair of the Catholic Education Commission of Western Australia for a number of years. However, the position of Parish Priest, so central to the life, mission and tradition of the Church, has truly been Monsignor Michael Keating’s pastoral vocation.

The University has shown its appreciation to Monsignor Keating by naming the Board Room after him, and in 2007 he was awarded an honorary degree of Doctor of Laws at The University of Notre Dame Australia.

This was awarded for his distinguished and significant contribution to the priesthood, to parish life and the Church in the Archdiocese of Perth, in addition to his exceptional service to, and support of the University as one of its founders. Monsignor Keating said at the time "I am extremely thankful in accepting this degree and grateful to have played a part in the extraordinary development of Notre Dame."