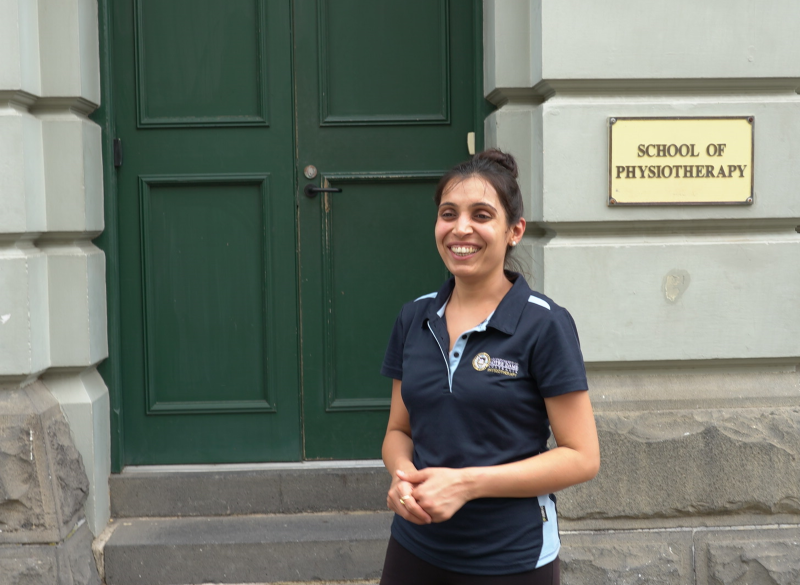 Physiotherapy student Gunjan Bajaj wholeheartedly believes that she is lucky to be at The University of Notre Dame. Despite years of obstacles, she retains an outlook of gracious modesty when she tells her story of coming to Australia and finding a home amongst the buildings and people that make up the Fremantle Campus.

Gunjan’s journey to Australia began in 2013, but to understand what led to her to make this move, it is necessary to go back a little further, to a young woman holding down both a Physiotherapist position and a physiotherapy teaching role in Surat, the Diamond City of India.

“I did my bachelor’s in physiotherapy in India,” Gunjan says, “and worked in Surat for a couple of years before getting married.”

Gunjan had never expected to leave India, but her marriage was arranged and when she met her husband and found out he had been living in Australia since 2007, she was happy to make the move.

“I was not planning on doing physiotherapy at all in Australia. I was warned by many people that getting through the Australian exams for physiotherapy was very tough, but I still wanted to use my skills from past experience in India, so I ended up going to TAFE and doing a certificate three and four in fitness and training.”

Though it wasn’t the career she had left behind in India, it was still the area of work Gunjan wanted to be in, and it was a suggestion from a friend at her next job as a physio assistant that sparked her desire to take the exams and become a fully accredited physiotherapist once again.

“There are five exams to pass,” Gunjan says, “which includes the English proficiency exam. There’s a written exam, three practical exams, and a final written exam.

“The waiting time is long, but I wasn’t in any hurry, so I thought I’d take the first exam and see how I went. If I passed I’d go ahead and take the others.”

Gunjan did pass. She also passed two of the three practical exams which, due to the lack of examiners in Perth, took place in Brisbane and Sydney. It was the exam in Melbourne that threw up the first major roadblock.

“I just got stuck, even with two attempts I couldn’t clear it. With these exams, if you fail just one of them twice, it means you have to start all over again from scratch.”

Owing to this bitter experience and huge financial cost, Gunjan wasn’t in the mindset to do this process all over again

When Gunjan received the latest result telling her she had not passed, she came to the realisation that perhaps going to university would be the better option. After spending a long weekend doing “homework”, Gunjan decided Notre Dame was the place for her. Her husband, family and friends were very supportive of the decision.

Since that day, she has found herself in a place of warmth, acceptance, and comfort. In her own words, she has been amazed at “the amount of kindness, goodness and thoughtfulness people at Notre Dame possess.”

Especially when thinking of recent events and the effects on her studies and home life, Gunjan can’t help but state her love of the University.

"Given the circumstances of COVID19, I was worried how I might be able to complete my course via online transition. But as always, staff at School of Physiotherapy went beyond my expectations. The entire team worked very hard, day in and out, helping us to get through these uncertain times smoothly and easily.

“Pre-recorded lectures, tutoring, live lectures, discussions on Blackboard, pastoral care, planning for catch up on missed content due to lockdown and clinical placements, psychological help, one on one sessions via zoom, updates on Uni and school-specific decisions, collaborating with higher authorities and councils for our benefit.

Just everything was offered to each and every student so that our future is safe and taken care of. I can’t fault a thing with this University.

Gunjan is looking forward to the day she can come back to Campus in Fremantle. She admits that simply being amongst the Fremantle community has given her so much more than she ever expected.

“Being on this campus, being with all the Notre Dame people around, it's teaching me something beautiful. Really. I'm going to cherish it for my lifetime.

“My journey at Notre Dame is not only going to make me a skilled Physiotherapist but also a better human overall. Appreciation, gratitude and respect are 3 words that come to my mind when describing this University to the world."

Gunjan was also the recipient of The Rocky Bay Scholarship, established in 2017 as a way of recognising a student in the School of Physiotherapy at The University of Notre Dame, Fremantle who demonstrates academic excellence and a commitment to providing support to people living with disabilities.