Kimberley and Pilbara teenagers given a taste of campus life

High school students from the Pilbara and Kimberley regions were given a taste of university life during a visit to Notre Dame’s Fremantle campus this week.

The years 10, 11 and 12 students from the Yiramalay Wesley Studio School in Fitzroy Crossing were in Perth for a week-long careers camp that introduces them to higher education options and employment pathways with major companies.

Notre Dame’s Manager of Indigenous Education, Kymberley Oakley, had the pleasure of showing the teenagers around the campus, which was particularly special for her given that she is a former Yiramalay teacher and knew many of the students well. 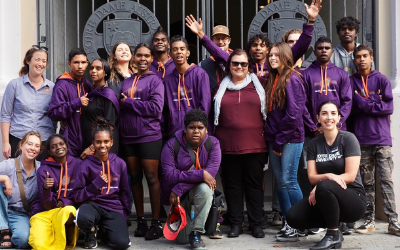 “They really are a wonderful group of kids and it was great to have them come down to Fremantle to see for themselves what life at a university is really all about, as well as being able to show them the different courses and facilities that we have to offer,” Ms Oakley said.

“In fact, some have already expressed an interest in pursuing further studies with us when they finish high school in areas such as nursing and sports science.”

Jirrwirliny, who is in year 12 and comes from Roebourne, said she was wanted to coach women’s football, but was also considering studying nursing.

“It was good to be (in Fremantle) looking around at the different places where they study and all the new places here… it’s very different from Yiramalay,” she said.

Kelwin, who comes from Derby, wants to play basketball in the NBL, but also hopes to get a degree. “I’m going to try for university after I graduate… sports science. But it’s very cold down here,” he said

For some of the students, it was their first time outside of the Pilbara and Kimberley.

But the highlight of the trip was taking part in sporting fitness assessments, similar to those that aspiring AFL footballers go through for the annual draft. Dr Ashley Cripps from the School of Health Sciences put the teens through their paces, with several impressing with their speed and agility.

They also visited the Round House to learn more about Fremantle’s Aboriginal history. The site was used to hold Aboriginal people before they were imprisoned on Rottnest. Many of those transported to the island never returned to the mainland.