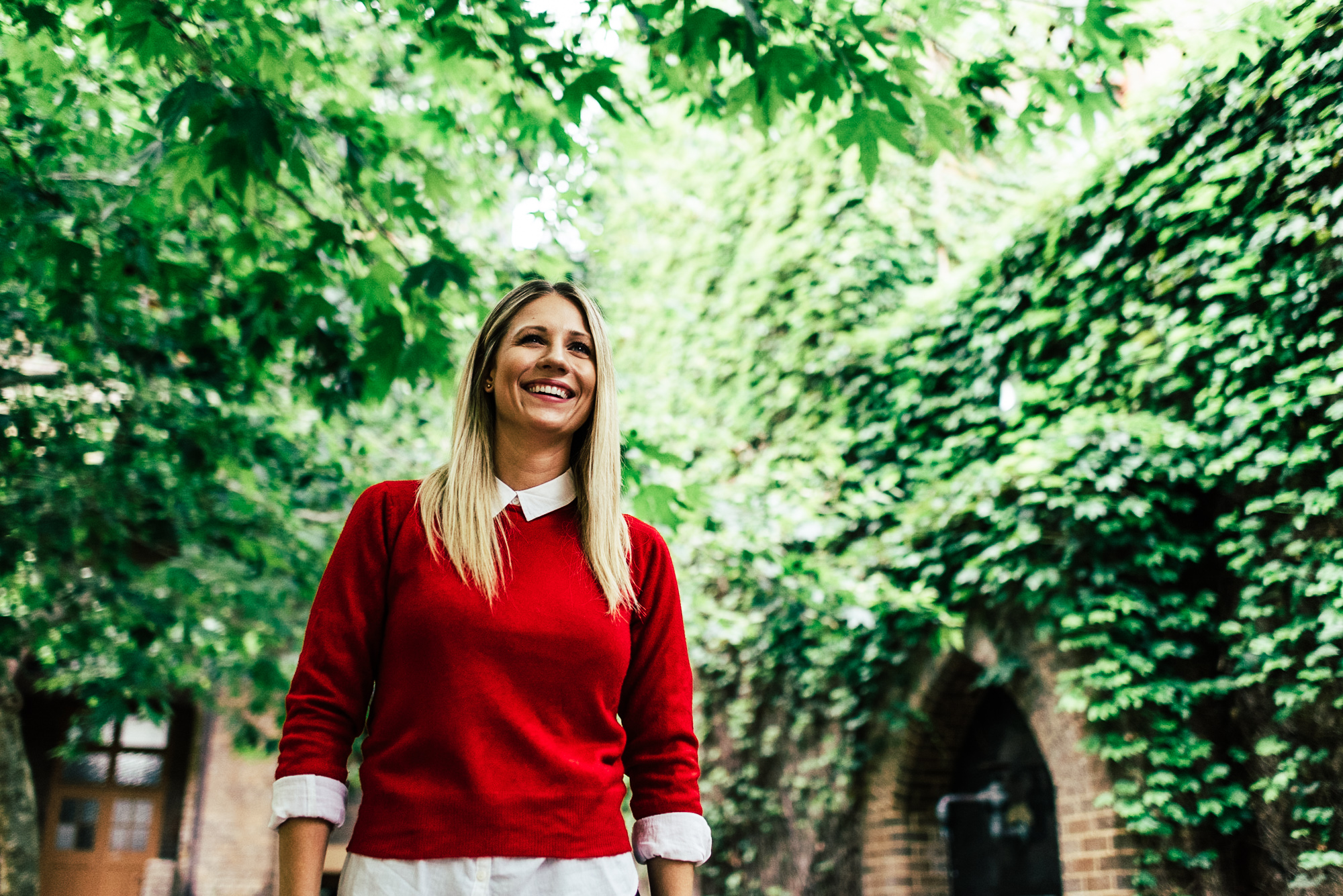 Sam Cook was one of the first cohort to study on the University of Notre Dame’s Sydney Campus. She graduated in 2009 with a double degree in Arts/Commerce and by 23 years old, she was CEO of not-for-profit One Disease. Now, at 33 years old, she has established two ethically-focused businesses of her own and says that it was her experience at university that spurred her to become an ethical leader.

When Sam reflects on her time at university she talks about “the Notre Dame difference” and remembers her classmates being so enthralled in debate and discussion that classes would often run over time but no one seemed to mind. “I realise now, it was during these sessions that the University was preparing me to be an ethical leader,” she says.

According to Sam, one of the major drawcards of Notre Dame is that every student, no matter their degree, completes the Core Curriculum of Ethics, Philosophy and Theology – areas of study that provide students a framework for better understanding and making decisions about the world around them.

“This means that each Notre Dame student shares a common underpinning that is unique to us. It’s what I call ‘the Notre Dame Difference’,” explains Sam. “Not only was I trained to be a critical thinker, but a compassionate one. Like a sailor equipped with the tools to navigate the seas, Notre Dame equipped me with theoretical knowledge, as well as soft skills that set me apart from others personally and professionally.”

During her time at Notre Dame, Sam took an active role in campus life, helping set up the inaugural Student Association to ensure students had an independent voice within the University. She later became Vice President of the association and it was her first taste of a leadership role in which she could advocate for others.

“I feel a deep sense of accomplishment when I can advocate on behalf of others, and this passion has put me on a unique path to leadership,” says Sam.

After graduating and working in marketing roles at L’Oreal and in her family business, Sam’s strong sense of social justice led her to volunteer at One Disease, a not-for-profit with a vision to systematically eliminate diseases from Australia, starting with scabies. She found herself doing more hours at her volunteer job than her day job and was eventually offered a full-time position within the organisation as CEO.

“Being 23 with no executive managerial skills, nor any background in healthcare, I had to upskill quickly. This was extremely daunting but I was armed with the belief that we can make a difference, and that all people deserve access to the basics of healthcare and education.

Mary Mackillop had a famous saying: ‘Never see a need without doing something about it’. This has always stuck with me and I really believe if there’s a will, there’s a way.

In her four years at One Disease, Sam was part of a team that successfully combined the wisdom of community elders with scientific research to help decrease rates of scabies within Australian communities. “Our novel approach was published in the Medical Journal of Australia and has been adopted in places like Fiji and the Solomon Islands,” says Sam.

Not long after finishing at One Disease, Sam and her husband Stuart embarked on a year-long honeymoon around the world that inspired her first business venture.

“Seeing so much of the world made me realise how beautiful it really is and how dependent we are on it. Everything and everyone is interconnected, and we need to protect the world for generations to come,” says Sam.

“Stuart and I came back to Australia and decided we’d start our own advisory and capital firm called TWIYO Capital, which stands for ‘The World is Your Oyster’. We seek to partner with businesses, tech organisations and individuals hoping to make positive change to the world, as well as the people they touch along the way.”

TWIYO Capital works with and invests in owners of small to medium companies to help put in place the reporting, structures, financial frameworks and corporate governance to assist with succession planning, capital raising, growth opportunities or maximising the sales value of their business.

Inspired by the success of others that TWIYO Capital helped, this year Sam and Stuart also decided to launch their own food business called Flave – a 100% plant-based meal delivery service. The idea for which was born out of a health scare that changed Sam’s life.

“This is a passion project; our legacy play – we’re on a mission to make it easier (and more delicious) for curious meat-eaters, flexitarians, as well as committed vegans to have a positive impact on the planet, one meal at a time.”

A lifelong meat-eater herself, Sam contracted a severe bacterial infection while travelling in Costa Rica and had to be airlifted to hospital, where she was treated with two powerful broad spectrum antibiotics that stripped her stomach’s microbiome, leaving it very sensitive.

“The doctor recommended having a plant-based diet as part of my recovery,” Sam explains. “In support, Stuart also made the switch but we struggled to find nutritious, flavoursome and convenient plant-based food.” There was a clear gap in the market and that’s where the idea for Flave came from.

“It was really interesting to be forced to experiment with my diet and it set off a chain reaction – both Stu and I went down some deep documentary rabbit holes, we read more widely and listened to podcasts. Our eyes were opened. We’d been living an unconscious life by not truly understanding where our food came from and how it inevitably affects the body and the planet at large.”

Taking matters into their own hands, Sam and Stuart teamed up with Gordon Ramsay-trained chef, Scott Findlay, who honed his plant-based recipes over a decade working as a private chef to legendary Sir Paul McCartney – a pioneer of the Meatless Mondays Movement.

Together they created Flave to offer people a convenient way to embrace the ‘Flexitarian movement’ and take the first towards creating change. “We know our global population is growing at a rapid rate, and more people means we’ll need more resources to sustain ourselves. However, even now at 7 billion people, millions are chronically malnourished and our natural resources are under intense strain… We’re going to need to give some serious thought to how we can adequately feed everyone, while still protecting our natural environment,” says Sam.

“As leaders, we need to recognise the impact of our decisions and how they affect others and the world around us. With leadership comes responsibility and now more than ever, there is a greater social responsibility that is beyond any one person or organisation. A company’s success is no longer simply about profit. The new value proposition is about creating what’s often described as a ‘public benefit’, which is defined as a positive impact on society and the environment,” she adds.

For better or worse, the rapid development of technology and social media means that anyone armed with a phone and an opinion can shed light on a topic or call out bad practice. One benefit of this as Sam sees it, is that business leaders are being called into the spotlight, where consumers are demanding transparency and a better balance of purpose and profit.

As CEO of Flave, for Sam, ethical leadership means doing the right thing, at the right time, for the right reasons. “Ethical leaders put their ethics before the bottom line and, in doing so it is more likely that their teams will be loyal, dedicated and ethical, in return. As long as you can articulate your values and share them with your team and customers, they will eventually see the truth in the decisions you make – even if it is unprofitable or inconvenient at the time.”

Part of Sam’s approach to leadership is surrounding herself with others whose moral compass she applauds, from business advisors to employees, and even friends. “This makes my job less stressful because I can place my full trust in the people around me, which is particularly important when I am reliant on them for information to make an executive decision that has far-reaching effects,” she says.

“Another way I demonstrate ethical leadership is by making good practice easy. Deep down, I believe that people are inherently good. However, sometimes it’s hard to actually do good because the problems we face can seem so overwhelming that you just don’t know where to start. This is particularly true for issues such as climate change. Because of this, people tend to give up and put it in the ‘too hard basket’. I’m trying to disrupt this mindset.