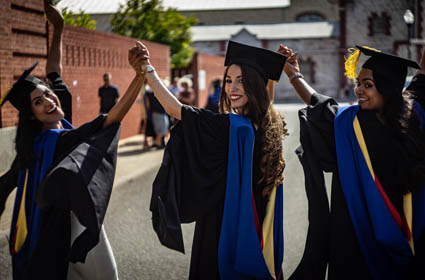 The University of Notre Dame Australia’s Fremantle Campus celebrated years of hard work, dedication, personal development and outstanding success of 1,116 Notre Dame graduates – including one Honorary Doctorate award and one posthumous award – at the University’s Graduation Mass and Ceremonies from 16-18 December 2019.

Celebrations commenced on Monday 16 December with the annual Graduation Mass at St Mary’s Cathedral in Perth. Several hundred guests attended the special ceremony and received their graduation crosses – a traditional icon of the University and a commemorative symbol of a student’s time at Notre Dame.

The highest achieving graduates delivered Farewell Addresses at each of the four ceremonies held on 17-18 of December – These students were Chelsea MacRae, Zoe Tippett, Luzanne Botes and Cassandra Mattes.

An Honorary Doctorate was awarded to Mr Paul C Boyatzis for his extensive contributions to the health care sector and the practice of medicine over the past 50 years. Professor Boyatzis was instrumental in establishing Notre Dame’s Medical School in Fremantle and was honoured at the graduation ceremony and at a reception held at the courthouse on Fremantle Campus.

“The world is transforming rapidly and the type of higher education you choose today is now more important than ever,” Dr Boyatzis said.

At a time when the world is in turmoil and many other universities focus on throughput rather than output, it is pleasing to see Notre Dame continue to guide its graduands, teach them skills, and teach them to critically analyse and challenge.

Well-known local Kailis family saw the third generation of medical doctors inaugurated to their family legacy with the graduation of Eleni Bacopanos from the School of Medicine. Eleni’s grandmother is former Governor of The University of Notre Dame Australia, Dr Patricia Kailis, and her mother is Dr Maria Kailis, a General Practitioner and close associate of the University through the support of internship placements.

Well-loved student Jake East was posthumously awarded a Bachelor of Physiotherapy. Jake died tragically in an accident late last year and friends and family travelled from the south west to attend the ceremony. Jake’s testamur was accepted by Corey Cheng and Luke O’Neill, Jake’s two best physiotherapy friends. A new award in his name, The Jake East Award for Excellence of Character celebrating the “good blokes” of physiotherapy was handed out at the School of Physiotherapy awards ceremony on the 18th of December.

“With this award, we acknowledge Jake's human qualities that he brought to our university community,” Dean of Physiotherapy, Professor Sarah Love said.

Notre Dame held a total of nine Graduation Ceremonies in 2019 - four in December and two in July on the Fremantle Campus, one in August on the Broome Campus, and two in March at the Sydney Town Hall - and farewelled 2,427 students nationally.

Pro Vice Chancellor, Head of Fremantle Campus, Professor Selma Alliex congratulated all graduates from the class of 2019 and said they have “every reason to be proud of their achievements.”

The recognition of each of the disciplines we teach are inextricably linked to the foundational and fundamental aspect of the University and that is to provide training for the professions. We believe that we provide an education which encompasses specialised expertise, knowledge and skills with the capacity to reflect on broader perspectives, including the ethical and social dimensions of work, research, decision making and promoting the common good.