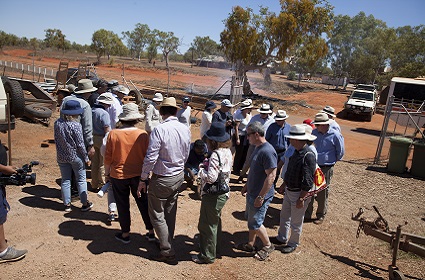 A three-day, cultural immersion program has taken senior judges from Western Australia’s District and Supreme Courts into the heart of the Kimberley with an opportunity to  meet with and hear directly about Aboriginal history, culture, language, country and family life.

Organised by The University of Notre Dame Australia from 11-14 September, 25 judges took part in the first-of-a-kind program which was based at the University’s Broome Campus and included a visit to an Aboriginal community and an overnight stay on country hosted by the Karajarri people.

The program reflected a recommendation from the 1991 Royal Commission into Aboriginal Deaths in Custody: that judicial officers be encouraged to participate in an appropriate training and development program to foster understanding of contemporary Aboriginal society, customs and traditions and participate in discussions with members of the Aboriginal community.

A visit to Bidyadanga community, (WA’s largest remote Aboriginal community) and an overnight trip on Karajarri country, two hours south of Broome, allowed for both structured and informal interactions between the participants.

“Included in the program were a number of sessions targeted at the judicial context, including topics focused on inter generational trauma, child development and the importance of engaging interpreters,” said Gillian Kennedy, lecturer and co-ordinator of Aboriginal Studies who organised the program on behalf of Notre Dame’s Nulungu Research Institute.

“It was grounded in the voices and perspectives of Aboriginal people, highlighting the strength and resilience of Aboriginal culture as a vehicle for healing,”

“It was also an opportunity for judicial officers to share some of their own experiences of their work, in order to foster ‘two-way’ learning, and to give the Aboriginal participants an opportunity to learn more about the role of judges and the court system, added Ms Kennedy

WA Attorney General, John Quigley, attended the first evening of the program.  In his opening address he told participants:

“All of us here today know that Aboriginal people make up 3.1 per cent of our State population and yet over 38 per cent of our prisoners.  We are acutely aware of the incarceration statistics as well as the sad fact that deaths in custody continue to occur.

“We are aware.  But awareness is not enough.  We need to understand.

“This conference will help us understand the challenges of being an Aboriginal person in Western Australia. What it means to be part of a remote Aboriginal community and the obligations of family, culture, ceremony and cultural law.  How it feels for an Aboriginal person as they experience Kartiya (white man’s) law – and the fear, suspicion and mistrust that follows.

Ms Anna Dwyer, Associate Lecturer and Research Fellow at Notre Dame led a number of the official functions including the Karajarri Orientation, a comprehensive overview of Karajarri country and culture.

Commenting on the success of the program, Ms Dwyer said: “It was a great benefit, the opportunity of a lifetime for the judges to see and understand the complexities of the issues faced by our people, such as language and distance.

“It gave the community hope that it will lead to change, with priority to making interpreters more available for so they have a real voice in the courtroom.”