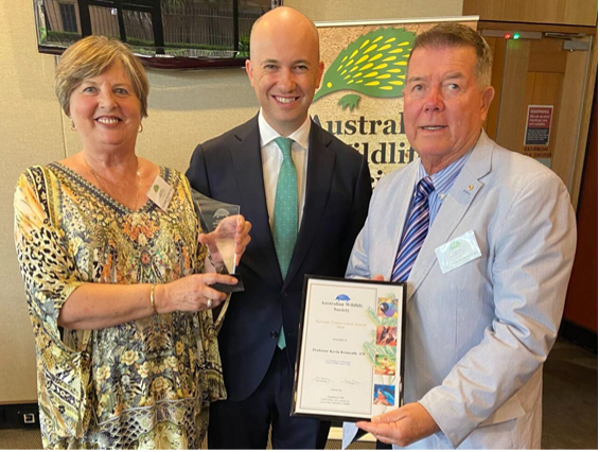 His work has been a life of public service where he has gone far beyond his positions' requirements.

Professor Kenneally was the inaugural scientific director of the multidisciplinary LANDSCOPE Expeditions program that provided volunteers the opportunity to be involved in hands-on wildlife research, led by Australian and overseas scientists. Over seventeen years, the citizen science program involved over 1,000 volunteers and raised two million dollars for wildlife research.

“The award is intended to recognise those who labour in the field for a love of nature and a determination that it should be conserved. For such an outstanding lifelong contribution to wildlife conservation, science, and education, Kevin is a worthy recipient of the Serventy Award."

Professor Kenneally was kind enough to speak to us about his passion for conservation, how he felt to receive this award, and his work with the Nulungu Research Institute in the Kimberley. Read his comments below:

I believe conservation should be important to everyone who understands the Earth's resources are finite and that a healthy planet is important for human survival. There are about 13,000 species of plants in Western Australia, of which some 3,000 are yet to be formally named. The south west of WA is a global biodiversity hotspot of incredible botanical and biological biodiversity and wonder. Here one finds more than 6,000 species of native plants and 100 native mammals, birds, frogs and reptiles, this is what makes the region a biodiversity hotspot.

The character of the region’s flora can be captured in two words: diversity and endemism. By way of a contrast, the northern hemisphere countries–for example the British Isles-–has fewer than 4,000 species with very few new species being discovered.

However, such a rich flora presents a real challenge in conservation. Already one-third of WA’s total flora, or 3,500 species, is conservation listed, meaning they are considered rare or vulnerable. So how do we prevent our amazing flora from becoming rare, vulnerable or extinct?

The emergence of Covid-19 pandemic has highlighted the danger when humans impact on natural environments allowing viruses to be passed from animals to humans. We need to stop destroying wild habitats, slow down and better manage land clearing (look at the plight of koalas and platypus from the impact of land clearing and wildfires), control feral plants and animals, better management and preparedness for wildfires in the landscape and anticipate the effects of global warming and increased aridity.

We live in a rapidly changing world where reconnecting with nature and caring for plant life will be needed for society to achieve sustainable ways of living. The destruction of natural vegetation contributes to about a fifth of the carbon emissions that cause global warming for society.

To counteract all of these impacts we need better education on the value of our nation's biodiversity. People do not appreciate or value what they don't understand. One way I have been able to address this has been my 35 years as president of the WA Gould League at the Herdsman Lake Wildlife Centre. Here we can do hands-on wildlife education with over 7,500 school children visiting the centre every year. We have also conducted a very successful Indigenous program 'Ancient Science' conducted by traditional Noongar leaders and financially supported by Catholic Education.

I was greatly honoured [to receive this award] as I owe a debt of gratitude to the late Dr Dominic Serventy for his patience, wisdom and advice to a young scientist. The Serventy's were pioneers in community conservation and highlighted the role that ordinary citizens could play in documenting the flora and fauna.

I greatly appreciate the opportunity to be involved with Notre Dame in the Kimberley. My association with the Nulungu Research Institute allows me to share my 50 years of biological research in the Kimberley and gain an understanding of the importance of traditional conservation methods across the landscape.

I respect and value the role of the Nulungu Research Institute for the ground-breaking projects being undertaken by Indigenous researchers in the Kimberley. I have been conducting research in the Kimberley since the early 1970's and have appreciated the support I have received from Aboriginal communities and individuals. Working with Indigenous people On Country and sharing their vast cultural knowledge is a great privilege. Without their support the project and book Broome and Beyond - Plants and people of the Dampier peninsula would not have been published.