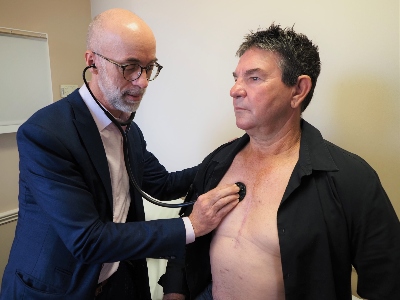 Researchers say increased screening is needed for a potentially fatal heart condition after a groundbreaking new study found more than 10,000 Australian deaths could be prevented each year through earlier diagnosis and treatment.

The study is the first to accurately estimate the human toll from Aortic Stenosis (AS), which occurs when the aortic valve hardens and narrows over time, making the heart work increasingly harder to pump blood around the body.

Because the condition mainly impacts older Australians, telltale symptoms such as breathlessness are often dismissed as merely signs of “old age”. Additionally, as many as a third of sufferers are asymptomatic, which is why the condition is often referred to as a silent killer.

The study found that regular screening, particularly for over 65s, would help to identify more cases, enabling sufferers to undergo life-saving aortic valve replacement surgery before it was too late.
The study was a collaboration between the University of Notre Dame Australia (UNDA) and the National Echo Database Australia (NEDA), which holds what is believed to be the world’s largest database of echocardiogram test results, including data from almost 1 million Australian patients.
The research team, led by NEDA co-founder Professor Geoff Strange, was able to calculate death rates by overlaying NEDA’s dataset with data from the national death registry.

Alarmingly, Professor Strange said the study also discovered that patients with only moderate AS were at a much higher risk of death than previously understood. Around two thirds of moderate AS sufferers were likely to die within 5 years if their condition was left untreated – only slightly lower than the death rate for those with severe AS.

“What our research shows is that aortic stenosis is actually far more deadly than we previously understood, and more deadly than many common cancers such as colon, breast and prostate cancer. That should be ringing alarm bells within the medical community,” Professor Strange said.
“As the tragic deaths of several high-profile sports stars have shown us this year, heart disease does not discriminate. So we strongly recommend that if you have symptoms such as unexplained breathlessness, or are over the age of 65, you should talk to your doctor about getting an echocardiogram performed.”

“Additionally, those with moderate AS who were previously thought to be at a much lower risk should make sure they are seeing a cardiologist to get a management plan in place, which should include regular echocardiograms to monitor whether their condition is becoming more severe.”

An echocardiogram is an ultrasound test that can identify structural problems within the heart.
Fellow NEDA co-founder, respected cardiologist and UNDA Professor, David Playford, said an echocardiogram cost only a few hundred dollars and was covered by Medicare. He said those identified as needing treatment could have their life span extended significantly through aortic valve replacement.

“Aortic valve replacement can be life-saving, particularly now that we have two treatment options available; traditional surgery to replace the faulty valve, or the newest method called Transcatheter Aortic Valve Implantation (TAVI), which does not require open heart surgery and has opened the door to this life-saving therapy to many more people,” Professor Playford said.

“But due to the high levels of under diagnosis in Australia, many people are simply missing out on that opportunity. Widespread screening, particularly for older Australians, would help to overcome that problem, saving as many 11,000 lives in Australia each year alone.”

Similar studies conducted in the US and the UK also found equally high levels of underdiagnoses in those populations. In the UK, it was estimated about 300,000 people were living with severe aortic stenosis, which equated to about 1.5 per cent of the population aged over 55 years. About a third of those cases were asymptomatic. Around 100,000 Australians are believed to be living with the severe form of the disease.