The Institute for Ethics & Society is delighted to announce one of its international visiting scholars for 2020: Professor C. Stephen Evans!

Professor Evans will visit the IES in July 2020, when he will deliver the 2020 Moral Philosophy & Ethics Education Annual Lecture (15 July) and instruct a masterclass on the virtue of accountability (13-16 July).​

We are thrilled that Professor Evans will be visiting us, and we hope that you might be able to participate in some of the research activities associated with this visit.

Professor Evans’ visit is an initiative of the Moral Philosophy and Ethics Education program within the IES. The Institute for Ethics & Society is delighted and honoured to announce that we will be hosting Professor William T. Cavanaugh (DePaul University) as a Visiting Professor to the University in November 2019!

Professor Cavanaugh is one the world’s leading researchers working at the intersection of ethics, politics, and the Catholic intellectual and moral tradition. His work has influenced an entire generation of scholars interested in using the resources of the Catholic tradition to develop fresh alternatives to moral and political reflection than those provided by secularism.

He is currently Professor of Catholic Studies and the Director of the Centre for World Catholicism and Intercultural Theology at DePaul University in Chicago. He has also held substantial research fellowships from the Harry Frank Guggenheim Foundation, the Kellogg Institute for International Studies at the University of Notre Dame, and the Notre Dame Institute for Advanced Study. A prolific researcher, Professor Cavanaugh is the author of The Myth of Religious Violence: Secular Ideology and the Roots of Modern Conflict (Oxford University Press, 2009), Torture and the Eucharist: Theology, Politics, and the Body of Christ (Blackwell, 1998), Theopolitical Imagination (T&T Clark, 2003), Being Consumed: Economics and Christian Desire (Eerdmans, 2008), Field Hospital: The Church's Engagement With a Wounded World (Eerdmans, 2016), and Migrations of the Holy (Eerdmans, 2011). He is the co-editor of three volumes, including The Blackwell Companion to Political Theology (Blackwell, 2003), and co-editor of the journal Modern Theology. His books have been published in 12 languages.

During his time at the IES, Professor Cavanaugh will take part in a number of research, ethics education, and public engagement activities on both Notre Dame Australia's Broadway and Fremantle campuses. The IES is committed to fostering greater ethical awareness in professional and social life, and we’re thrilled and humbled that Professor Cavanaugh will be sharing his expertise with the NDA community in November. 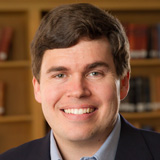 The Institute for Ethics & Society is delighted to announce one of its international visiting scholars for 2019!

Professor Christian B. Miller, the A. C. Reid Professor of Philosophy at Wake Forest University, will be visiting the Institute from 3-7 June 2019. During his visit, Professor Miller will deliver the 2019 Moral Philosophy and Ethics Education Annual Lecture and instruct a 5-day masterclass on philosophy of character.

Professor Miller’s research focuses on virtue ethics, empirically informed moral psychology, and the philosophy of religion. His prolific research output in recent years has focused on developing connections between findings in empirical psychology and the philosophical study of character and moral development.

Professor Miller is the author of The Character Gap: How Good Are We? (OUP, 2017), Character and Moral Psychology (OUP, 2014), and Moral Character: An Empirical Theory (OUP, 2013). He is the co-editor of Character: New Directions from Philosophy, Psychology, and Theology (OUP, 2015), Moral Psychology, Volume V: Virtue and Character (MIT Press, 2017), and Integrity, Honesty, and Truth-Seeking (OUP, forthcoming). His books have been reviewed in major philosophy journals, such as Ethics, Mind, and Analysis, as well as in popular media outlets such as The Wall Street Journal, Psychology Today, and Christianity Today.

We are thrilled that Professor Miller will be visiting us, and we hope that you might be able to participate in some of the research activities associated with this visit.

Professor Miller’s visit is an initiative of the Moral Philosophy and Ethics Education program within the IES. 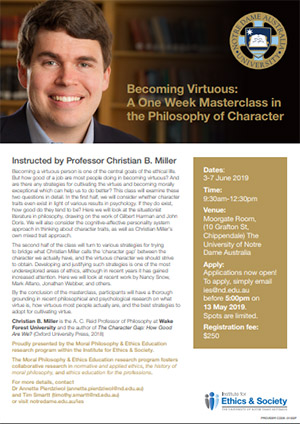