Ron and Helen Dullard established The HELYRON Education Scholarship in 2013, after retiring from full-time work. The Scholarship is open to commencing students in the School of Education and assists with expenses and tuition fees for their first year of studies.

The name HELYRON is a composite of Helen and Ron, their son Heath and his wife Lynne. The Dullards were driven by a desire to enhance students’ chances to enter the teaching profession by providing financial support; their advice to scholarship recipients is “Follow your passion, don’t give up your studies... you never know what future doors they will open.” 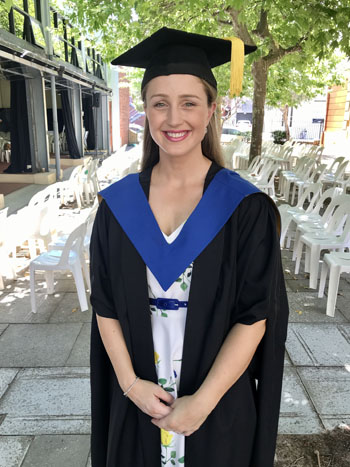 The HELYRON Education Scholarship has certainly opened many doors to inaugural recipient Gemma Thomson, who went from a full-time teaching position at Sacred Heart College soon after completing her Graduate Diploma of Education, to being appointed Head of Religious Education at Iona Presentation College two years later, where her career skyrocketed to her current role as Dean of Mission and Catholic Identity. Five years on Gemma recognises the financial assistance she received by saying

I express my heartfelt gratitude to the Dullard family for their generous scholarship, which positioned me to focus on my postgraduate study and practicums throughout my course, and to fulfil my dream of truly making a difference through education. I wanted to have a career that allowed me to imprint young people's lives with knowledge and positivity, and I have been blessed to have been able to do so thus far.

Born in Perth, Ron and Helen are both alumni of The University of Western Australia, and they have a background in education and social services respectively.

Ron has held a number of senior positions across the education sector, including a Principalship at Xavier Catholic College, Deputy Director of the Catholic Education College in WA for five years, and Director of Catholic Education Western Australia (CEWA) from 2003 to 2012. During his time as Director of CEWA, Ron oversaw some noteworthy initiatives, such as the introduction of fee discounts for health care card holders, the transition of Year 7 to high school and the introduction of the Quality Catholic Schooling initiative.

Ron has also made a significant contribution to national Catholic Education projects, including the Gonski Report, and has increasingly emphasised the opportunity for leadership training and professional development for all staff in Catholic schools.

In 2013 he was appointed as an Adjunct Professor in the School of Education at The University of Notre Dame Australia's Fremantle Campus and he commented at the time "We're always looking at trying to improve educational outcomes for students and I hope I can make a significant contribution to the University to achieve this goal.” Ron’s affiliation to Notre Dame has also seen him as a member of the Board of Directors and Governor. In January 2020 he received the award of Officer of the Order of Australia (AO) in the General Division for distinguished service to education in Western Australia, to local government, and to the community. Helen’s community involvement extends across more than 40 years, including 28 years as the Chief Executive Officer of the Hills Community Support Group, renamed Rise in 2012, a not-for-profit organisation that assists young people at risk, those experiencing mental health issues, people with disability, carers and the elderly. She also spent 15 years as a West Ward councillor until 2015, when she retired from the position of Shire of Mundaring President. Helen has since volunteered with organisations such as The Smith Family and We the People WA, to name a few.

Her passionate work and commitment to the underprivileged has been officially recognised with several awards, including the WA Centenary Medal in 2003, the Pearce Australia Day Award and the Order of Australia Medal in 2004, followed by the John Curtin Medal in 2008.

Since their retirement, Ron is involved in Board memberships in education, which include roles at the Court Grammar School in Mundijong and the Teacher Registration Board of Western Australia, while Helen still works in the social service sector. During their little spare time left, they both enjoy photography.